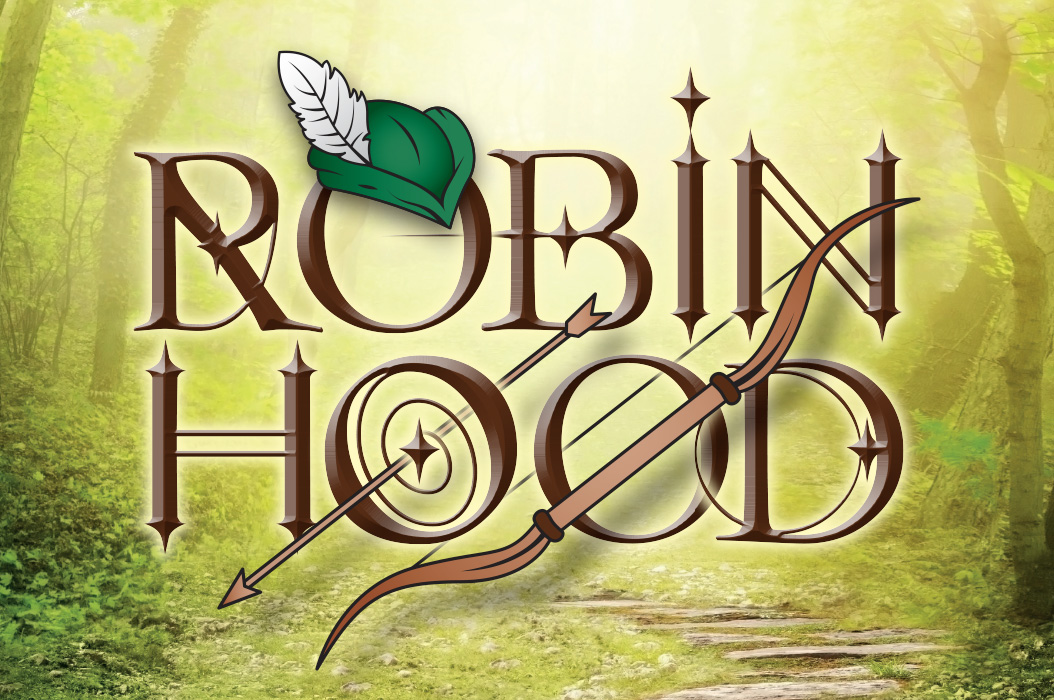 Robin Hood, prince of outlaws and unbeatable archer is a character that emerges from the fog of an oral tradition, of folklore that mixes local legends, Celtic gods and historical facts. Different sources from the 14th century mention, in the diffusion of ballads and poems, the deeds of the famous outlaw, while the first complete tale appears around 1500 (A geste of Robyn Hode). In the 16th and 17th centuries Robin Hood is alive on the theatre stage and becomes the subject of an unfulfilled work by Ben Jonson; he is also mentioned in different works by Shakespeare. In 1765, Thomas Percy includes in his collection Reliques of Ancient English Poetry the old ballad Robin Hood and Guy of Gisborne. In 1795, Jospeh Ritson publishes the collection Robin Hood: A collection of all the Ancient Poems, Songs, and Ballads that had a great influence. But it was Sir Walter Scott, within the chapters of the novel Ivanhoe dedicated to the archer of Sherwood, who definitely contributed to fixing the features of his character in modern times.

Sir Walter Scott, considered the father of the genre of historic novels, was born in Edinburgh in 1771 and, during his teenage years, acquired a wide experience of human sciences. In 1792, he got a Degree in Law. In 1796, the reading of Reliques of Ancient English Poetry by Thomas Percy (a collection of ancient ballads re-evaluating the Middle Age) made a strong impression on him. In these years German Romanticism spread across Great Britain and Scott, now a young Judge, neglected his law profession in preference for literature and travel; during one of his journeys he met Charlotte Genevieve Charpentier whit whom he got married and they had 5 children. In 1801, he started writing and publishing ballads and short poems, among which was the collection The Minstrelsy of the Scottish Border (1802-3), and in 1805 the novel in rhymes The Lay of the Last Ministrel was  published. From 1814 he tried his hand at writing historical novels, beginning with Waverlay  and going on with successes like Rob Roy (1818) and The Bride of Lammermoor (1819). In 1820, he wrote Ivanhoe, the work he is universally known for still today, a work that inspired Alessandro Manzoni in Italy. Falling into financial ruin in 1814, he then devoted his life to writing with such a rush and productivity that he also ruined his own health. After two heart attacks, he died of typhus in 1832.

In the forest of Sherwood the legendary archer Robin Hood leads a group of rebels, the “Merry Men” who, with bows, sticks and irony as their weapons defy the powerful and defend the humble. These are hard times: king Richard the Lionheart has left for the 3rd Crusade and his cruel brother, Prince John “Lackland”, is harassing the poor with excessive taxes and endorsing the injustice and abuse of the nobles. Among Prince John’s supporters, the Sheriff of Nottingham stands out for his cruelty. He is Robin’s sworn enemy. The two of them are always fighting and setting traps for each other but, when Robin succeeds in giving back to the knight Alan-a-Dale his lands and destroys the plan of the Sheriff of Nottingham, who wants to get married to Alan’s bride-to-be under false pretenses, the fighting becomes merciless. The Sheriff kidnaps Marian, the woman Robin has loved since childhood, and condemns her to be burnt to death as a witch in order to lure Robin into a trap. Robin needs all his cunning and all his friends to save the game against the cruel Sheriff.

A precise historical context helps to understand the deeds of Robin Hood, narrated in this musical directed by Edward Johnson (The Wizard of Oz, Hamlet, Alice in Wonderland): we are in England in the year 1192, when King Richard the Lionheart is in Europe for the 3rd Crusade and his cruel brother, Prince John “Lackland”, has usurped the throne. Costumes take inspiration from the medieval forms, with scant license to the style of drawings, especially regarding bright colours that make the characters highly recognizable, and corresponding to the popular image of them. With agility and dexterity the actors represent the fight of Robin and his fellows against injustice, making a clever use of a multi-functional set:  through interesting and choreographed scene changes in open view, they go swiftly  from the forest of Sherwood to the town of Nottingham, and vice versa. With this background, the plot is developed in a dynamic way thanks to a well-balanced alternation of dialogue and songs, mainly belonging to the genre of celtic and folk music; the lyrics of which have been rewritten to fit better the content of the story. Choreographies contribute to the development of the action, too, visually underlining the meaning of the music performed live by the native speaking performers… all this makes the show easily enjoyable for younger students. Sound and light effects, expertly realised, describe each scene very precisely, for full emotional involvement. 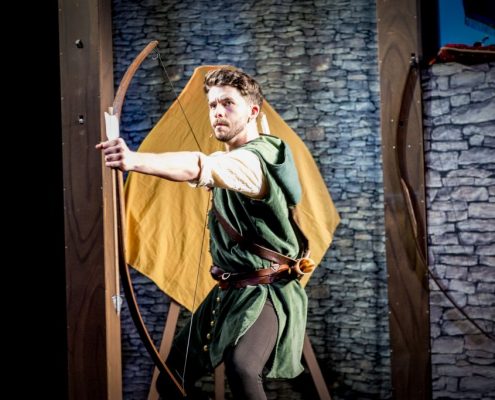 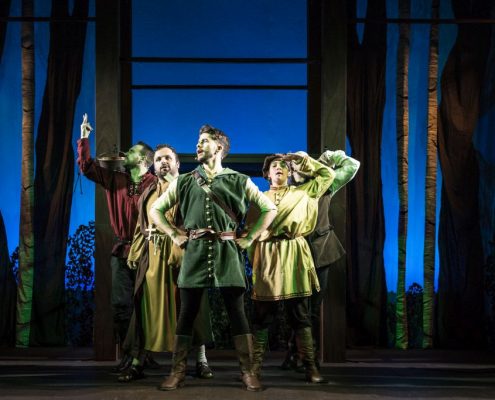 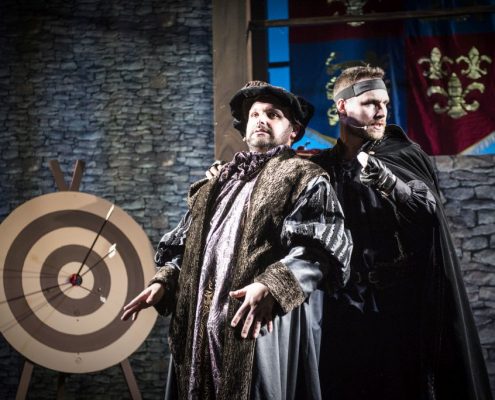 Bodas de Sangre
Scroll to top
We use cookies on our website to give you the most relevant experience by remembering your preferences and repeat visits. By clicking “Accept All”, you consent to the use of ALL the cookies. However, you may visit "Cookie Settings" to provide a controlled consent.
Cookie SettingsAccept All
Manage consent